By Chloramine Consulting on April, 22 2021
Back to main Blog

Let's discuss the differences between chloramine, or chloramines, versus actual chlorine. They sound similar and share some similarities, but there are important differences to understand. Especially as it pertains to swimming pool water chemistry and indoor pool air quality.

Covered in this article:


What is a chloramine?

How are chloramines formed?

Now let's be more specific. When chlorine of any type is introduced to water, it will dissociate and create an equilibrium in two forms: the strong, killing form of chlorine, Hypochlorous Acid (HOCl) and its about 100-times weaker counterpart, Hypochlorite Ion (OCl-) and a Hydrogen ion.

Chloramines are formed when hypochlorous acid combines with ammonia in a reaction that looks like this:1

We did not show you all the variations of these reactions, because there are A LOT of various forms of nitrogen compounds that contain ammonia–foremost among them is urea (CH4N2O).3  There are many stages of chemical reactions before you get to such a simplified reaction as the one just shown.

As you can see in the illustration above, an ammonia molecule (NH3) is a Nitrogen surrounded by three Hydrogen. When HOCl combines with ammonia, its chloride (Cl) replaces one of the Hydrogen, creating NH2Cl, or mono-chloramine. Add enough additional HOCl to the ammonia, and another chloride replaces the second Hydrogen, creating di-chloramine (NHCl2). The third and final form of chloramine is created when more HOCl replaces the final Hydrogen to create tri-chloramine, formally known as nitrogen trichloride (NCl3).

Trichloramine off-gasses from swimming pools and is the leading cause of 'the pool smell'. If you were smelling actual chlorine, it would be extremely dangerous, if not lethal.2 Thankfully, even though chloramine vapor is noxious and unhealthy, it's nothing compared to inhaling actual chlorine gas (Cl2⇡).

Where do chloramines come from?

The three (3) main sources of ammonia are:

Urine and sweat from bathers is a very common problem for pool operators to deal with. Due to the culture of competitive swimming, athletes pee in the pool (for various valid reasons discussed here). As for sweat, athletes almost never shower prior to getting into the pool either.

Ammonia-based cleaning products are commonly used as pool deck/floor cleaners. Any product containing the word "ammonia" or "ammonium" should be avoided around swimming pools. We have another article specifically about this.

Chloraminated drinking water is also a possibility, where municipal water treatment plants will deliberately add some ammonia to the tap water. Sounds crazy, right? Obviously they do so for a reason. You see, chloramines themselves actually have some disinfection power. Monochloramine, for instance, has 200x weaker disinfection strength than HOCl,1 but it can disinfect nonetheless. This can be valuable for drinking water sanitization because chloramines will last longer in the pipes, especially in those far-out corners of the water grid. But then again, chloramines in drinking water can also be problematic...especially for swimming pools.

Chlorine, in its purest form, is a halogen element, found on the periodic table (element number 17)4. Chlorine gas (Cl2) is an extremely powerful disinfectant, and it is also an oxidizer. Various forms of chlorine are used for disinfection and cleaning in a wide variety of industries: household cleaning products, food processing, and of course swimming pools. Saltwater pools utilize electrolysis to produce chlorine gas from sodium chloride (salt), along with other byproducts like sodium hydroxide.

Since chlorine gas itself is dangerous and extremely acidic, there are several modified chlorine products that we use instead:

Commercial swimming pools almost always use a hypochlorite chlorine as their primary sanitizer; either sodium hypochlorite (liquid chlorine), or calcium hypochlorite (cal hypo). These chlorines have an alkaline pH because they are manufactured in such a way to preserve shelf life and longevity. But as mentioned earlier, when any type of chlorine is introduced to water, it dissociates into HOCl and OCl-. Without cyanuric acid (chlorine stabilizer), the pH of the water determines the concentration of HOCl and OCl- in equilibrium. 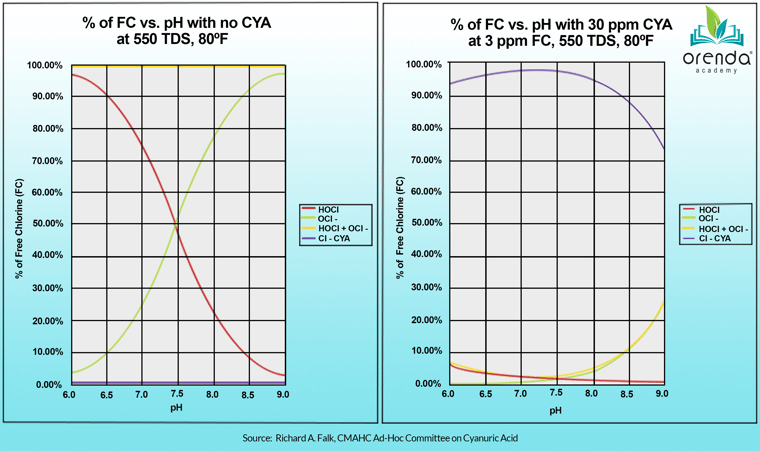 This is why the lower your pH, the stronger your chlorine (in a non-stabilized pool). And thinking that all pools must maintain a 7.2-7.8 pH for chlorine efficacy is a common misunderstanding about pH. 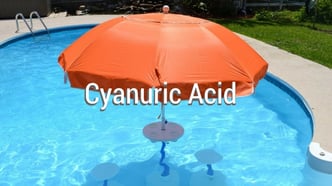 Of course, if your swimming pool is outdoor, you want to protect chlorine from direct sunlight degradation. That's accomplished with cyanuric acid (CYA), which binds to chlorine and protects it from sunlight. Most commercial pools simply add CYA as needed, and they can control the level of CYA in the water without running the risk of chlorine overstabilization. But there are also two types of chlorine that are manufactured with CYA blended into the product already.

Trichlor and Dichlor are about 50-55% CYA by weight, and the rest of it chlorine. Trichlor is by far a more popular product, because it is pressed into slow-dissolving tabs that can last a week or more. Trichlor is very acidic (2.8 pH). Dichlor is used as a granular shock, and is fairly neutral (6.5 to 7.0 pH). Neither of these chlorines should be used on indoor swimming pools.

Chlorine, on the other hand, is a powerful sanitizer/disinfectant and also an oxidizer, though it is a weak oxidizer in comparison to its strength as a sanitizer/disinfectant. Pure chlorine gas (Cl2) is rarely used in pools nowadays because of the dangers of handling it, so hypochlorite and stabilized chlorine products are sold on the market instead. Most commercial pools use a hypochlorite chlorine, either liquid chlorine or cal hypo.

So if you smell the pool, know that it's not chlorine, it's chloramine.5

2  There are several variations of chlorine that can be inhaled. Simply smelling bleach in a bottle is not what we are talking about here. We are talking about the severe danger of inhaling chlorine gas itself, not the vapors from sodium hypochlorite (liquid chlorine). Another dangerous vapor to inhale is if chlorine is mixed with hydrochloric acid (muriatic), which can also produce toxic fumes. Rule of thumb: if you smell something, get to fresh air. Here are the CDC guidelines.

3  Urea is a primary component of urine, which is among the leading causes of chloramine issues in swimming pools. Learn more about urea here.

5  Chloramine and other DBPs like chloroform, a trihalomethane, and literally hundreds of other partially-oxidized nitrogen and organic compounds can be present. The term "chloramines" is a broad-brush word to cover them all.