Many natatorium design problems can be prevented if designers and contractors understand the swimmer's perspective. Swimmers see things designers don't.

And amidst the excitement and lose-your-voice type of screaming, I was looking around in the natatorium and scratching my head. Here is this beautiful aquatics venue...with one of the most frustrating HVAC designs I have seen.

Design with swimmers in mind

Had the designers of this natatorium–and its major renovation a few years ago–understood how swimmers would use the venue, the obvious flaws that I saw may not have happened. But before getting started, you should know that I have not seen mechanical drawings, nor have I been on the roof to look at the equipment of this pool. My observations are blurred because of these unknowns, but I have done my best to infer what is going on with the airflow.

Now, without further adieu, here are some of the flaws I saw in this particular natatorium (which shall remain unnamed), in the hopes that anyone reading this can help prevent these sorts of things from happening in other pools in the future. 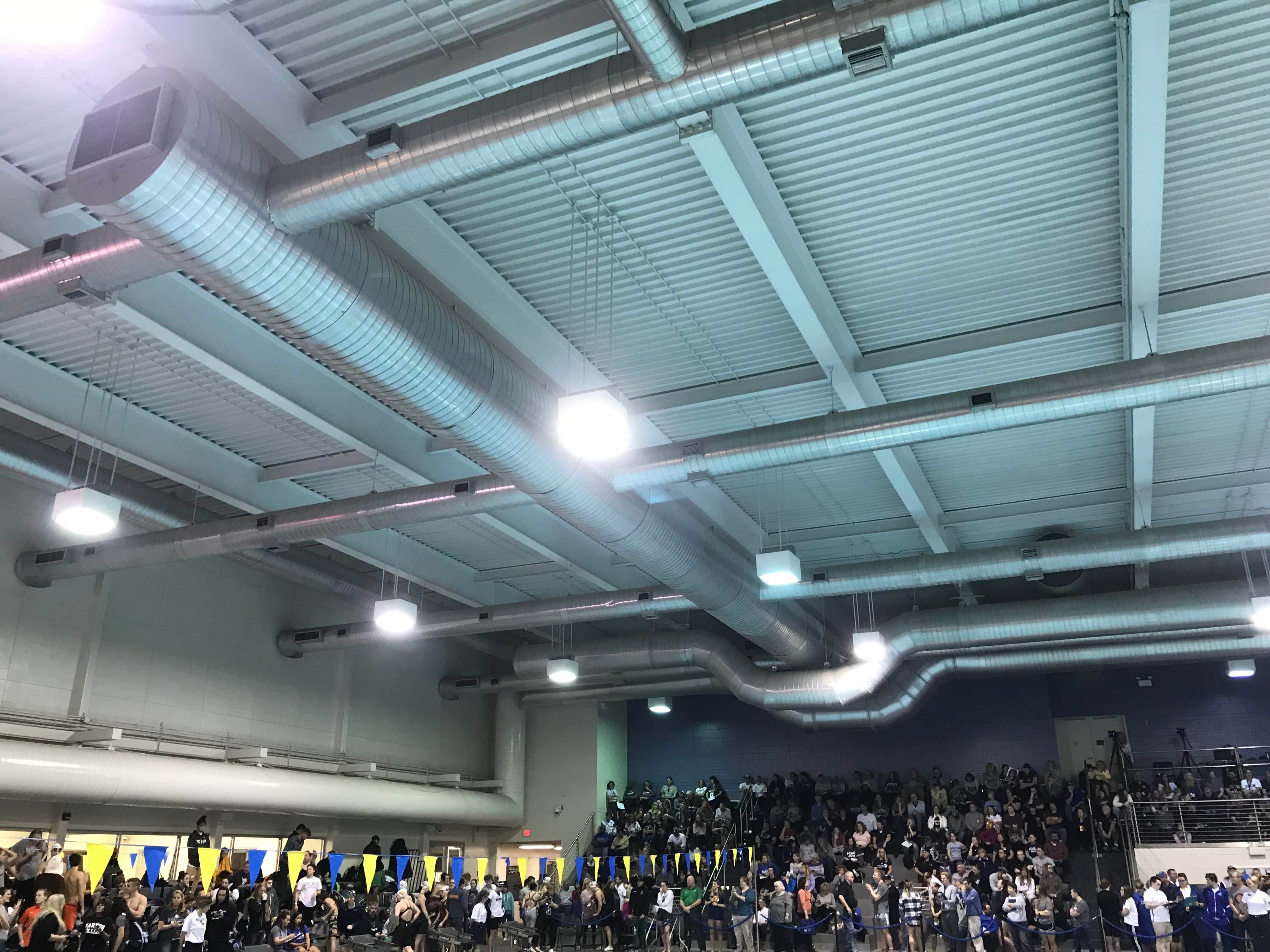 This ductwork is original to the building, and was kept throughout the renovation. That's understandable, considering the heavy costs associated with removing and replacing duct that is already hanging above a large swimming pool. But just look at the complexity of this layout! Even for someone like me, who evaluates natatorium HVAC systems professionally, could not be sure of which ducts were which. I went back and forth on trying to figure out which ducts were supply, which were return, and which were possibly dedicated exhaust. Yes, returns and exhausts are different. There were large round registers high up on the wall, which I figured must be returns, but then there were criss-crossed ducts that did not connect to them.  Why?

If they are not connected to the wall returns, why have a seperate duct for return? Unless I'm mistaken, and all of them were supply ducts.  But even that wouldn't make sense, because why criss-cross them in such an expensive way? And furthermore, why are all the registers of similar size and shape? Normally, return registers are larger than the supply ones, because supply air must be 'thrown'.  It was thoroughly confusing, to say the least.

While swimmers don't notice such things, it matters when air quality is a problem. Sure, this room probably distributes supply air pretty well, but based on the feedback from swimmers and my own personal experience being on the pool deck for 4 hours, there is little (if any) air movement to clear the pool surface of airborne chloramines.

Natatoriums need good air distribution, but the focus should be less on supplying the ceiling with conditioned air, and more on supplying air in a way that provides swimmers with clean, breathable air. This natatorium's airflow design does not do that. Naïve designing would be understandable, but that wasn't the case here. Because the next glaring issue confirms the designers were aware of the air quality problem.

Exhaust ducts that are both impractical and inconvenient

All I know for sure is that these ducts draw in air from the natatorium, but it remains unclear if they are dedicated exhausts, or if they are actually return air that goes back to a system for recirculation. Again, I never got on the roof, nor have I seen mechanical drawings.

One thing is for sure, there is no source-capture exhaust in this facility.

Air is drawn into ducts that reach down to about 10 feet above the pool deck (on the opposite side of the pool from the main returns). This promotes decent air movement for those of us standing on deck, but it seemed odd to me that they would be located on this side of the pool, when the returns are on the other side. If they are both drawing air, these will provide minimal relief, especially for heavy chloramines. Why? Because the air–in theory–should be moving in the direction of the main returns. In other words, away from these ducts. Perhaps I'm wrong in this case, because the complexity of the duct layout has me confused on many levels. Maybe they're onto something, and I'm the naïve one. It certainly wouldn't be the first time.

Even if these ducts are brilliantly located and doing a great job, there is still one major problem with them, especially from the perspective of swimmers and coaches: they block the scoreboard.

Yes, while I think the intake ducts are impractical, their location is visually inconvenient. See the picture below. 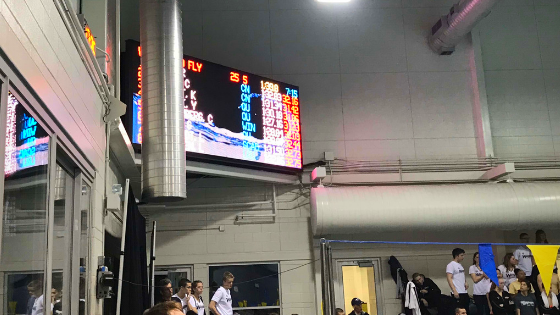 Standing on deck, this entire side of the pool cannot see the names of the swimmers, or the place they finished in. Oops.

By the way, this could be rectified by simply moving the scoreboard out about 4 feet. As a mere spectator standing amongst swimmers and coaches, this obstruction is beyond annoying.

No photos are available for this one, because taking photos in a lockerroom is prohibited (and for good reason). There is a duct that runs through the middle of the lockerroom and it blasts conditioned air throughout the space. While this may be good for air conditioning, the air velocity is high enough that wet swimmers' teeth chatter. It's not that the supply air is cold, it's that evaporative cooling on skin is a real thing. A better way to ventilate a lockerroom would be to not blast air directly toward wet swimmers. It's fine in a dry lockerroom, but not in one that has drains in the floor because it is directly connected to an open shower area and a swimming pool. Wind on wet skin = freezing cold.

We have written about common natatorium design mistakes before. My opinions on this facility come after spending 4 hours on the pool deck during their championship meet last night. By all means, that is about the busiest a natatorium will ever be, and judging its air quality during that time (without being there the rest of the year) is not fair to the facility. So my observations were not so much about chloramines as they were about the design itself. All in all, the air quality was not great, but on deck, it was not horrible either.

One thing I will say, however, is the humidity was well regulated. This makes sense with such broad supply airflow. Heat and humidity rise, and there was plenty of duct up there to deal with that. My concern is for the swimmers themselves, because I used to be one. I actually competed in this very pool, and I remember what it was like. And while these new intake ducts may make the deck airflow better (but who knows?), they visually block the scoreboard for everyone on that entire side of the pool.

I understand working with existing duct layouts, because most of what we do is try to help existing natatoriums improve their air quality with as little duct modification as possible. But in this case, why the new intakes on the opposite side of the pool from the returns? Why conflict and criss-cross the airflow?  It just complicates things.

These are design flaws that probably had good intentions, but each have unintended consequences. So if you are designing a natatorium and want to hear a swimmers perspective, just request design assistance and perhaps we can help you avoid issues like these.