The Difference Between Return Air and Exhaust Air

By Chloramine Consulting on August, 28 2019
Back to main Blog

This is a brief article to shed light on a problem. The problem is one of semantics, but the consequences are real indeed. Too often the terms return and exhaust are used interchangeably, but they are not the same.

"Return air", usually measured in cubic feet-per-minute (CFM) or its metric equivalent cubic metres-per-hour (CMH), is all the air that is drawn into the dehumidification unit from the natatorium. In an ideal world, all air in the natatorium will circulate well and eventually be returned through the pool dehumidification unit (PDU) for filtration and conditioning. In reality, however, there are usually dead spots in the room, so the return is just pulling a constant volume of air.

The air volume in the room is calculated by the mechanical engineer, and the dehumidification system is designed to circulate that volume of air a certain number of times per hour; usually 4-6 turnovers per hour for indoor swimming pools.

So return air is everything that is drawn through the return duct en route to the PDU.

"Exhaust air", also measured by volume in CFM or CMH, is the air that is discarded from the facility. In natatoriums, this is often through dedicated exhaust fan(s), and/or an exhaust fan located within the return duct itself. Let's repeat that. Many natatoriums have their primary exhaust fan located within the return duct, or in the first chamber of the PDU. This is likely the reason for the confusion between the two terms, because both return and exhaust air can go through the same vent(s) in the natatorium.

Exhaust and Return are not the same, and they should not be used interchangeably...especially for indoor pool applications.

One major difference that separates pool dehumidifiers from normal air conditioners is energy efficiency. PDUs are specifically designed to handle large moisture removal loads while also recovering energy (usually heat). We sometimes refer to this prioritization on energy recovery as "closing the energy loop". Otherwise, we would just be exhausting warm, conditioned air to the outside, and lose all of its energy. PDUs nowadays can take reclaimed heat and heat pool water, or simply pre-heat outdoor air that is being drawn in to replace what was just exhausted.

For optimal energy efficiency, most engineers aim for the ASHRAE 62.1 minimum outside air standard (in CFM). Because air quality is a concern, systems are often increased in size and capacity to handle more outside air than ASHRAE requires. Minimal outside air means less energy costs to condition that air.

So for decades, PDUs became increasingly efficient at reclaiming heat, and to do so, they made the exhaust air part of normal circulation pathway, after its heat was recovered. In other words, the actual discarding of air occurs within the PDU itself, and is drawn from the return air stream. From an energy standpoint, it makes sense. From an air quality standpoint, however, it can become problematic. 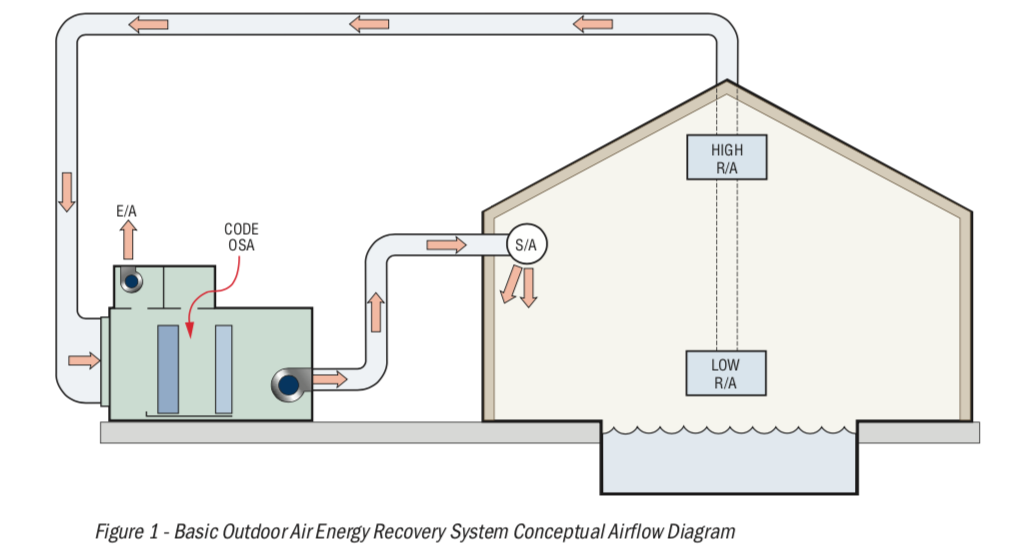 Diagram is from Desert Aire Corp., used with Permission

The diagram above shows return air being pulled through the PDU, then exhausted (E/A) from the PDU itself. While this diagram does not show specifics, many PDUs like this sometimes run the return air through a set of coils to reclaim heat prior to the air being exhausted. But that's not the point we're trying to make. The point is, on mechanical drawings and blueprints, the return air duct will just be labeled "return". Even though that duct is also serving as a channel for the natatorium exhaust.

Here's why semantics matter so much: if we confuse return air with exhaust air, natatoriums will continue to be designed improperly. We may have low returns when we really want low exhausts, or vice versa. And since everyone wants energy efficiency, designers and manufacturers end up finding a common ground...but often at the expense of patron health and wellness. Swimmers, lifeguards and coaches are forced to breathe in harmful chloramine vapor and other disinfection byproducts (DBPs) in the air.

Natatorium IAQ problems tend to fall into one of the following categories: a stratification problem or a recirculation problem. Stratification is when trichloramines and trihalomethanes and other DBPs, which are heavier than oxygen, build up in the bottom of the room, starting in the swimmers breathing zone. With poor circulation and air movement, this chloramine bubble builds and builds. Natatoriums with a stratification problem have a perpetual pool smell, a constant irritation and if bad enough, rust and corrosion in the natatorium. These rooms usually have high returns, and the chloramine bubble must build high enough to be diluted out. It's a mess.

The opposite problem, chloramine recirculation, may actually be worse. Low returns pull the chloramine bubble into circulation, and stir everything up. This may be more pleasant during light use, but when the swim team gets in, the air quality can go from decent to horrible within one air exchange (10-15 minutes usually). This issue continues to compound itself. When the production rate of DBPs exceeds the dilution rate of the air handling system, air quality can get out of control, quick.

Pools with a chloramine recirculation problem tend to have rust and corrosion everywhere, not just low in the room. We're talking the ceiling, inside the PDU, computer equipment, scoreboards and other electronics, and everything in between.

Both of these issues can be prevented.

Semantics are not the only problem with this traditional, energy-efficient pool design. Ask yourself: do you think an exhaust fan can identify which air is good, and which is bad? Can an exhaust fan separate chloramines from fresh air in the return air flow? Of course not. But source-capture exhaust can separate the bad air from the good, and keep the bad from circulating through the main PDU, corroding everything in its path.

Believe it or not, the freshest air in a natatorium is usually at the top of the room, up by the ceiling. Sure, it's warm and humid air, but chloramines are heavy, and stay low in the room. If we truly want to optimize pool dehumidification and indoor air quality, we must separate the exhaust from the return.

Consider both high and medium return duct heights to reclaim the warmest, most humid air to pull through the PDU. In a completely separate airstream, exhaust low with source-capture technology. If you want to go a step further, there is an energy recovery option designed specifically for a source-capture exhaust, and it is completely separate from the main PDU and its fresh air circulation.

Here at Chloramine Consulting, our first priority is the health and comfort of an indoor swimming pool. We care first and foremost about air quality. Energy efficiency is a secondary priority, though still important. The good news is, the amount of dedicated source-capture exhaust needed for great indoor air quality is a small percentage of the total return air volume.

So when you're looking on mechanical drawings and you see ducts labeled "return" or "exhaust", look carefully and add up the CFM of each fan and system. The designer might be confusing the term, or using it to represent both. It's an issue with semantics, but they are semantics that can be very costly to a natatorium in the long run.