By Chloramine Consulting on December, 17 2019
Back to main Blog

We wrote a previous article about five common mistakes in natatorium design. Now let's talk about errors we see in the implementation and installation of pool dehumidification systems. These mistakes can cause major problems for not only indoor air quality, but also operating costs and the life expectancy of the equipment itself.

Indoor pools release a lot of humidity and airborne contaminants into the air. One of the casualties of these two things is the supply duct itself, or its supporting hardware. For instance, we often see rusting metal ductwork hanging in the ceiling of a natatorium. Having corrosive chloramine vapor getting that high in the room is alarming in itself, but sadly it is very common. The supporting brackets and cables that hold up these giant ducts are often corroded too! Thanks to this law called gravity, corroding hardware poses a safety concern over time. And yes, we have seen pools where the duct literally fell apart and collapsed onto the ground. Thankfully nobody was injured because it occurred overnight.

When we say wrong duct type, we are really implying that the duct selected for a natatorium should be built to withstand the natatorium environment. And not only from a corrosion standpoint; from a bacterial standpoint as well.

If using rigid duct, use a corrosion-proof (or at least corrosion-resistant) material like aluminum. It can be painted to match the room's color scheme, and should last for the life of the building. If using fabric duct, spend the extra money and get the anti-microbial option. The crud that lurks in ductwork is neglected because it is out of sight, but mold and other disgusting outbreaks can occur in supply ducts. 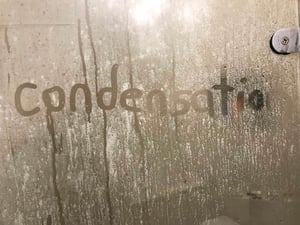 "Washing windows" means blowing warm, conditioned air directly onto exterior glass windows. This conditioned air prevents the temperature of the glass to drop below the dew point, and therefore prevents condensation. Too many times we have walked into natatoriums and have seen windows that were just drenched. The hot, humid air in the natatorium touches that cold outside window, and because its surface temperature is below the dew point, the moisture condenses on it. It can be a LOT of moisture, which can lead to damage of the wall itself.

Stamped drawings from an engineer will almost always indicate registers for windows. But sometimes buildings are not built exactly the way the drawings show, and as a result, windows and supply registers may not align just right. It sounds like a no-brainer, but it is a mistake we see often enough that we must mention it here.

Evaporation increases with air movement. Think about evaporative cooling when we sweat, or climb out of a swimming pool and into a breeze. When the air is moving on wet skin, it's far colder than when the air is still. As air moves over water, it evaporates faster. So let's take that fact and apply it to an indoor swimming pool.

If supply registers are aimed at the water, more water will evaporate than it should. ASHRAE recommends air movement no more than 30 to 50 feet-per-minute (FPM). The reason is simple: faster air means more evaporation, and therefore more moisture in the air. That excess moisture is probably more than the dehumidifier was designed to handle. If so, it puts stress on the dehumidifier, and shortens its lifespan. 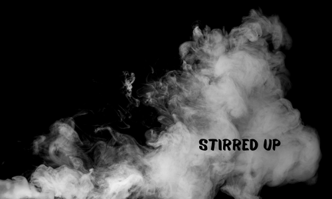 From an air quality standpoint, there are two other problems beyond evaporation that we care about. First, with more evaporation comes more off-gassing of chloramines and other disinfection byproducts (DBPs). Second, imagine blowing directly on a handful of flour. Flour goes everywhere. Supply air aimed at the pool tends to do the same thing to off-gassing pollutants like chloramines. And if your pool is fortunate enough to have a Paddock Evacuator® system installed, stirring up chloramines is counterproductive. Source-capture exhaust is just an ordinary exhaust when pollution is stirred up at its source.

Okay, you're right. These were both mentioned in our previous article about mistakes in natatorium design. But these issues are not always just a design mistake; they can be an installation issue too. Sure, the design would show where the locate the return air intake and exhaust fan, but someone has to install them too. Ceiling exhausts and floor returns are common in natatoriums, and they're problematic.

The ideal is to have mid-level and/or high returns, with low, source-capture exhaust, as illustrated by this drawing from Desert Aire's 21st Century Natatorium Design Guide: 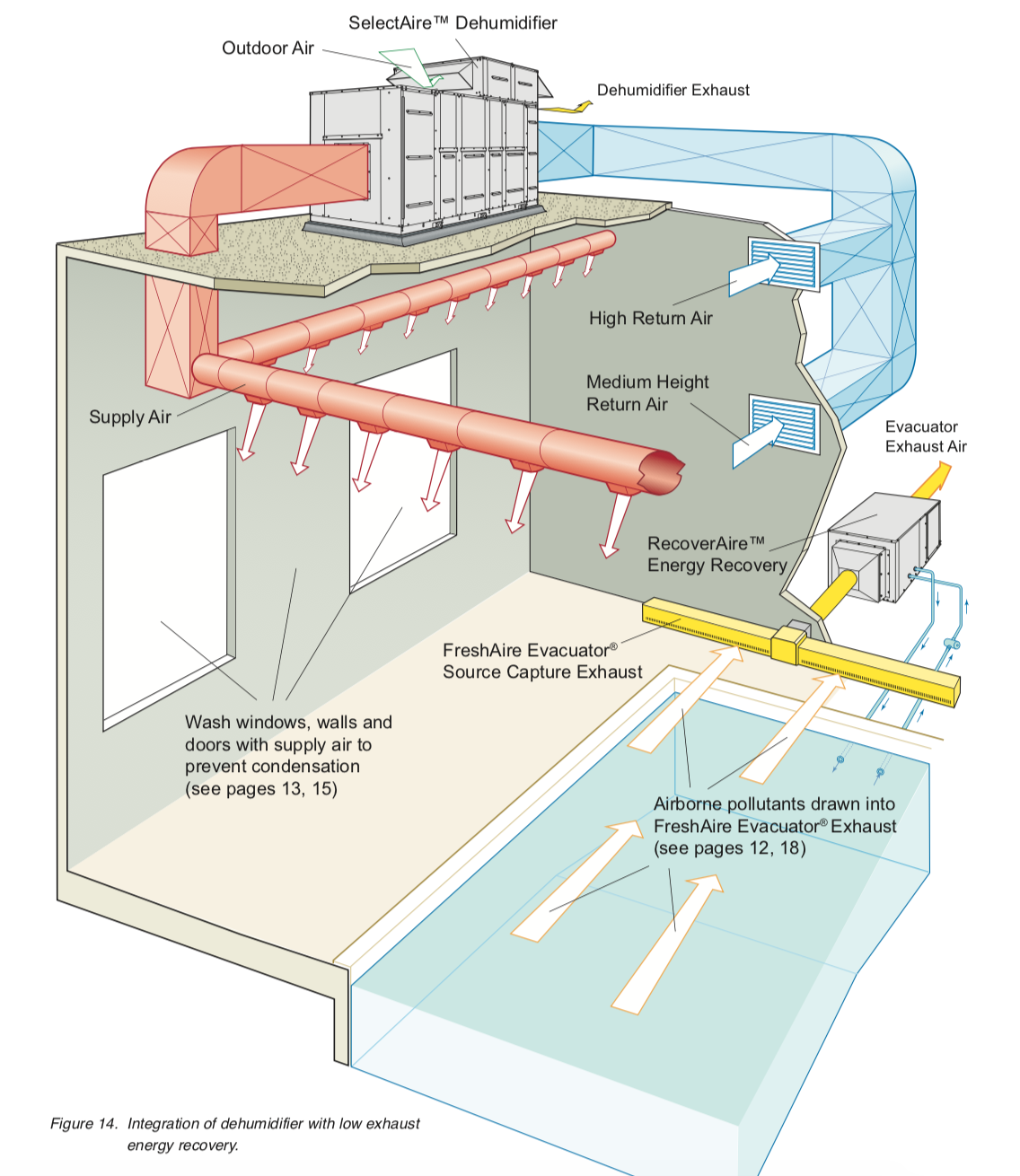 High exhausts throw away the cleanest air in the room, even though it is the warmest. In the summer time that can help keep the room cooler...except most natatoriums are kept in the mid 80ºF range anyway. It takes far more energy to heat cold outside air during the winter. So these ceiling exhausts do no favors for energy consumption, or air quality. Remember, chloramines and other disinfection byproducts (DBPs) are heavier than oxygen, and stay low in in the room.

Low returns pull in chloramine pollution and recirculate it. And as we have discussed in many of our other articles, chloramine pollution is very acidic and corrosive. It rots out coils and other components within the Pool Dehumidification Unit (PDU), which shortens the equipment's life. 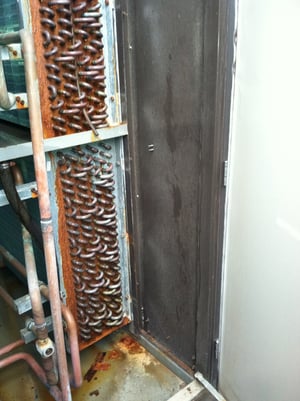 Chloramines are very corrosive, and recirculating them is kind of like forcing the PDU to chain-smoke 24/7.

The more appropriate layout–as shown in the 3D illustration above–removes the vast majority of chloramines and DBPs from the room through the Evacuator®, so the rest of the air can recirculate as designed. Less corrosion, and much better air quality.

1. Failure to Test and Balance

Throughout an HVAC system, there are ducts, louvres, dampers, registers, and other components that direct and re-direct airflow. It is essential that the entire system be tested and balanced. Both too much and too little airflow affect the PDU's efficiency. Both issues can negatively impact patron comfort and air quality, so be sure to balance the system right. The PDU needs a certain amount of airflow to operate properly.

Sometimes these issues are because of how the duct was installed. Perhaps it was the wrong type of duct (see item #5 above), or maybe the issue was caused by value engineering. Either way, a proper test and balance of the system will identify its shortcomings, and they hopefully be resolved early on, before air quality problems occur.

Too often we walk into indoor swimming pools that are hot, humid and miserable. Heat and humidity are a dehumidification issue, not necessarily a chloramine issue. But when combined with chloramine pollution? Yuck. At the very least, be sure the system you have is operating the way it was designed to.

Bonus: Elbows and Tees too close to the PDU

This mistake comes from this article, and is worth repeating. Sometimes a PDU is put in a small room, or is located in a place that requires sharp turns in ductwork. Put simply, if there are 90º Elbows or Tees too close to the air handler, turbulence will result.

On the return side (air moving from the natatorium back to the PDU), an elbow right before the PDU can result in uneven airflow across the coils. If looking at the coils, imagine the vast majority of air is moving in just 20 or 30% of the surface area. It is inefficient and there could be higher energy bills as a result.

On the supply side, Elbows and Tees too close to the PDU can create more obvious problems to people in the natatorium. Uneven air distribution can create dead spots, turbulence that can stir up chloramines, and a cold breeze that makes swimmers teeth chatter. The air quality game can be won with an effective air airflow pattern that covers the room properly. Conversely, without a good, even airflow, good air quality is difficult to attain.

If you have issues with air quality, it could have been a design or implementation mistake that was made. Not all air quality problems are caused by water chemistry problems! In fact, very few pools with great air handling systems and airflow designs will have bad air quality, regardless of water chemistry. At least, that's what we have found in our experience.

If your indoor pool struggles with indoor air quality, maybe we can help.