By Chloramine Consulting on February, 19 2020
Back to main Blog

In natatoriums, When the air gets rough, the fans get blowing.  And that's not always a good thing.

Airborne disinfection byproducts (DBPs) like chloramines are heavier than oxygen. They build up low in the room, and are most concentrated in the swimmer's breathing zone right above the surface of the water. Because of this, many swim teams and facility personnel have had similar ideas for how to provide relief to their swimmers: blow air across the surface of the pool.

And while this makes logical sense to alleviate the chloramine problem for swimmers, a natatorium is like an ecosystem–everything has consequences. This article explains why blowing air directly at a swimming pool is a bad idea.

Fans should not blow air directly on a swimming pool

ASHRAE 62.1 recommends a maximum airflow velocity above the water of 30 feet per minute (fpm). From ASHRAE §62.1 (emphasis added):

"Supply air should be directed against envelope surfaces prone to condensation (glass and doors). Some supply air should be directed over the water surface to move contaminated air toward an exhaust point and control chloramines released at the water surface. However, air movement over the pool surface must not exceed 30 fpm [as per the evaporation rate wp in Equation (1)]." - ASHRAE 62.1, Page 5.7

30 fpm is pretty slow. That's just six inches per second. For context, most 6-lane lap pools are between 42 and 45 feet wide, and 75 feet long. 30 fpm means it would take air 90 seconds to travel the width of the pool, or just over 150 seconds (2 minutes and 30 seconds) to go the length of the pool. A lot of chlroamines can be released into the air in those minutes.

You might be thinking–like most people do–that air should move faster to clear the chloramine vapor from the pool surface. But there is a consequence of doing so. Air moving faster than 30 fpm over water, as noted in the above quote from ASHRAE 62.1, increases the evaporation rate. Everything that is changed in a natatorium's air system has consequences. Increased evaporation not only increases the rate of chloramine off-gassing, it adds stress to the dehumidifier too.

It should be noted, however, that if air is blown slower than 30 fpm, evaporation rates may not be significantly impacted. But almost every fan on the market moves air faster than 30 fpm, so this article focuses on real world examples.

Why blowing air on a pool increases evaporation

Here is a summarized, simplified lesson in physics. And by the way, we didn't know this off the top of our heads, we had to look it up for this article to make sure we had the facts. Our sources are hyperlinked in this description. 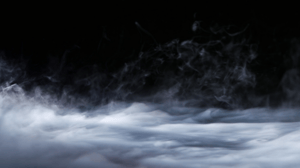 There are three main parameters that determine evaporation rate of water: the surface area of the water, temperature, and the partial pressure of water in the air (humidity). The more surface area, the more exposed the water is to air, so there is more evaporation. Same with temperature; the warmer the water, the more rapid it will evaporate. But the key factor in our article today is the third one: the partial pressure of water already in the air. Here is a direct quote from the University of Illinois Physics Department forum:

When the rates are equal, so there's no net evaporation, we say the "relative humidity" is 100%.  Relative humidity, determined by the temperature and the water vapor partial pressure, says how much water is in the air as a fraction of the total amount the air can hold when "saturated". -James, published 10/22/2007

So when the 'wind speed' increases on the water surface, it moves humid air away from the water, creating a lower relative humidity level, locally. This encourages more evaporation. These three paramaters explained above help explain why hair dryers work. They increase temperature, wind speed, and by blowing hair around loosely, surface area.

So blowing air directly on swimming pools increases the wind speed, which encourages more evaporation into the air. So what?

Indoor pools, under ideal dehumidification circumstances, tend to evaporate close to their total volume of water in one year. For easy math, let's say you have an 8-lane lap pool with 365,000 gallons in it. That means your pool will evaporate 1,000 gallons of water per day, and the dehumidifier is designed to pull much of that moisture out of the air to give the natatorium a desired relative humidity level of 50-55% RH. So the Pool Dehumidification Unit (PDU) is made for 1,000 gallons of water per day.  Cool. No problem.

There are hard costs associated with increased evaporation too. Sure, the extra stress on the PDU will eventually require additional maintenance, and eventually replacing compressors and evaporator coils. But how about daily energy costs? There is a lot of latent energy in return air that can be reclaimed by a good pool dehumidifier–which is one of the main reasons we strongly advise our clients to use a properly-sized PDU instead of just an air conditioner on an indoor swimming pool. Even with a good PDU, more moisture removal means higher energy costs. 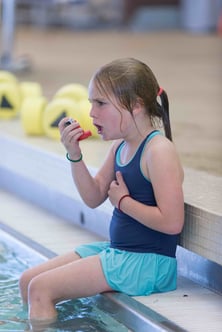 Then there the human costs, which are less tangible but more important. More evaporation makes the room feel more humid and uncomfortable. Warmer air can hold more moisture, but while the PDU is struggling to keep up with the additional moisture, it can be miserable on a pool deck. And of course, more evaporation means more airborne chloramines in the breathing zone. And that is the main problem

We have another article about keeping outside doors closed, especially in the winter. One of the worst things pool operators or swim coaches can do is to prop open outside doors, which will draw unconditioned outside air into the room. Sure, it provides temporarily relief to swimmers (which we totally understand and do not fault anyone for caring about people's health first). But cold, unconditioned air creates a big temperature difference above the water's surface (known as Delta-T, or ∆T). Because the water is so much warmer than the cold air being rushed into the room, evaporation goes up. 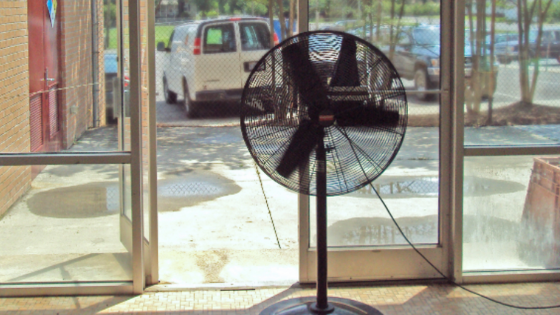 And as we just covered in the previous section, more evaporation means more stress on the system, and more chloramines in the air.

Another issue with blowing air directly on the pool surface is that it stirs things up. Chloramines and other airborne pollutants may be invisible, but we know they are heavier than oxygen. They like to stay low above the pool and wet deck. If you blow a fan toward the water directly, the chloramine bubble will be disrupted and who knows where it will go? Chloramines become much more difficult to control when they are stirred up.

Resist the urge to simply blow air across the surface of the pool. If you somehow can move air at 30 fpm (perhaps 50 fpm at the most), that would be one thing. But most fans you can buy off the shelf are not made to do such slow speeds. It really takes a more permanent modification to the supply duct layout in the natatorium to accomplish a clean sweep of the breathing zone. We specialize in helping mechanical Engineers do exactly that, whether it be for an existing natatorium in need of help, or a new facility in the design stages.  It can be more complicated than it seems, because as we mentioned before, everything has consequences when changing an air system. Especially for an indoor pool.

The second part of the puzzle is having a place to push the airborne disinfection byproducts (DBPs), so they do not continue to build up in the room, and eventually recirculate. That's where source-capture exhaust comes into play. But it's not very effective if chloramines are stirred up and the PDU cannot keep up with the moisture demand in the space.