By Chloramine Consulting on April, 10 2020
Back to main Blog

Trihalomethanes (THMs) are harmful disinfection byproducts (DBPs) found in drinking water and swimming pools. They can off-gas from swimming pools, which contribute to indoor air quality problems for natatoriums. Fortunately, only one of the four THMs is common in pools.

Before getting started, there are hyperlinks to peer-reviewed studies and articles at the bottom of this page, which are also available in our research library.

The aquatics industry generically refers to all off-gassing chlorine byproducts as chloramines, but that is merely a generalized term. There are countless variations of specific DBPs. Trihalomethane gases are a subcategory of swimming pool DBPs. So let's talk about what they are and how they form.

According to the Water Research Center, Trihalomethanes are a group of four chemical DBPs:

"Trihalomethanes (THM) are a group of four chemicals that are formed along with other disinfection byproducts when chlorine or other disinfectants [like bromine] used to control microbial contaminants in drinking water react with naturally occurring organic and inorganic matter in water."

According to the CDC website, Trihalomethanes all share a similar structure. A central carbon atom, with a Hydrogen, and three Halogens. The two primary sanitizer types for swimming pools are both halogens: chlorine and bromine. So there are four combinations possible for those three halogen spots on the atom, as you can see in the list below.

The four Trihalomethanes are:

The EPA's most current regulations limit the concentration of these 4 chemicals added together (total trihalomethanes, or TTHM) to 80 parts-per-billion (ppb/µg/L).

Very few indoor swimming pools use bromine as a primary sanitizer, so it is unlikely to face the last three THMs. Let's focus on the one THM that is most common in chlorinated swimming pools: chloroform. 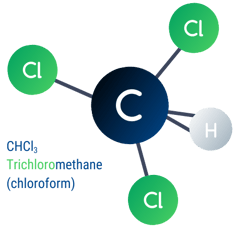 Yes, this is the famed substance used as an anesthetic to 'knock someone out'. But that reaction only occurs with acute exposure via direct inhalation. The concentrations of chloroform in swimming pools is exponentially less than would be necessary to knock someone out. In fact, the lowest concentration of chloroform detected by smell is between 206-309 ppm. There is no comparison between that and the EPA limit of 80 parts-per-billion for all trihalomethanes in drinking water.

Chloroform, formally called Trichloromethane, is created as a byproduct when chlorine oxidizes organic and inorganic materials...in particular, Methane (CH4). Much like Nitrogen Trichloride (NCl3), aka trichloramine, it appears chlorine replaces hydrogens on methane much like it does on ammonia (NH3).

Chloroform is often present–albeit in small amounts–in municipally treated drinking water. Its primary mode of absorbtion into the human body is by drinking water; not swimming in a pool. There have even been studies on how to quell the production of chloroform in drinking water using Chlorine Dioxide (ClO2). We know that chlorine dioxide systems do exist, and we know it can destroy chloramines and trihalomethanes (including chloroform). We are curious as to why they are not used as a secondary sanitization system for swimming pools.  There must be a reason, and we can write a future article about it as we learn more.

How to reduce Total Trihalomethanes (TTHM) in swimming pools

As mentioned before, chlorinated pools really only have to deal with Chloroform (Trichloromethane). The other three Trihalomethanes exist only when bromine is used in the water. So the question then becomes how to reduce chloroform in a swimming pool.

From what we have read, the best way to stop TTHMs is to do so at the treatment facility, prior to the water ever getting to the natatorium. The primary objective is to remove the precursors to trihalomethanes using advanced filters and enhanced coagulation.

But since we do not have control over how the city treats our drinking water, let's just cover the things we can control.

Filters do exist that can remove all types of trihalomethanes from the influent water, but they can be costly. Activated charcoal filters can help, as can reverse osmosis. Surprisingly, from the research we have done so far, it appears that UV systems and even Ozone cannot destroy trihalomethanes like chloroform.

Alas, it seems that, like ammonia and urea, chlorination and off-gassing of these compounds is inevitable (if they are present in the water in the first place). Which, short of a chorine dioxide system, means there is no known water chemistry solution for removing trihalomethanes from swimming pools.

And since chloroform can indeed off-gas into the air, we should therefore look at it as an air quality problem.

How to remove airborne chloroform from an indoor swimming pool 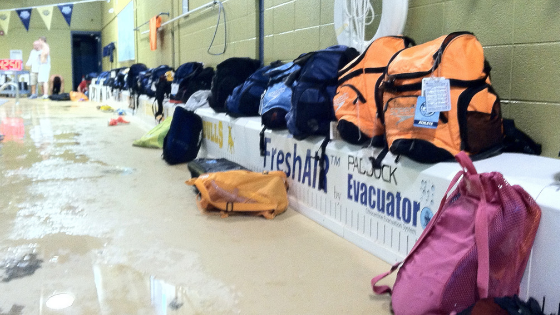 Because the molecular weight of chloroform is much heavier than oxygen, this is the same answer as THMs and other disinfection byproducts. Source-capture exhaust.

For natatoriums, there is a patented exhaust system called the Paddock Evacuator®, which can be built into the pool's perimeter gutter, into the pool deck itself, or as a retrofit bench or wall-mounted system for existing pools.

The objective is to capture and remove as much airborne pollution as possible, as efficiently as possible. The Evacuator does exactly that.

There are also some secondary air purification technologies available on the market, but it is unclear at this time if they knock out THMs in the air.

While they are much less prevalent in swimming pools than chloramines, THMs can be introduced to a pool from the tap water. As for THMs produced in the pool itself, chloroform is the only one of the four THMs that can be produced in a chlorinated pool, because bromine is not present. Obviously if your indoor swimming pool is on a bromine system, you can have other THMs created too.

THMs are known to be harmful, and are classified by the EPA in Group B2, as a probable human carcinogen. Even if they are not carcinogenic to humans at the low concentrations we experience in swimming pools, hopefully we can all agree they are not good.

We wish there were a chemical way to reduce them beyond chlorination itself, but there appears not to be at this time. Therefore we must resort to removing chloroform once it goes airborne. Because its weight is heavier than oxygen, chloroform will behave like chloramines, and therefore can be captured and removed via source-capture exhaust.