By Chloramine Consulting on August, 4 2020
Back to main Blog

Whether we like it or not, indoor swimming pools are warm, humid environments. By virtue of how they operate, indoor pools create more vapor pressure than any other type of room we can think of. There are unique design requirements that must be done to prevent problems.

What is Vapor Pressure?

As written in our glossary, Vapor Pressure is the pressure of evaporated water in the air:

Vapor Pressure -(n) The equilibrium pressure (measured in Pascals [Pa]) of a vapor above its liquid or solid form in a closed container or building. In other words, Vapor pressure is the pressure of the evaporated liquid above the liquid itself. In a natatorium, its the pressure of moisture in the air that evaporated from the swimming pool, and is contained in the natatorium room.

Heat and humidity rise and expand. So when water evaporates, the moisture in the air is trying to expand as much as it can in a given space. There is then a vapor pressure differential between the room with the vapor and rooms with less vapor. For indoor swimming pools, that differential can lead to problems.

Outdoor pools have no vapor pressure concerns because there is so much space for the humidity to rise and expand. An indoor pool, however, contains the water vapor and the pool dehumidifier tries to maintain a certain relative humidity (RH). This containment builds vapor pressure. This vapor will be pushing out from a natatorium, unlike just about any other type of room in a building.

Examples of natural equilibrium are evident in and around swimming pools, not just nature itself. Henry's Law of the Solubility of Gases, for example, explains why swimming pool pH rises with the loss of CO2, because CO2 is trying to equalize with the air above the pool. When it comes to air physics, vapor pressure wants to equalize too. In virtually every type of building except for indoor swimming pools, the outdoors has more moisture in the air than the indoors. Therefore, outdoor humidity tries to push into our homes and commercial buildings to equalize the vapor pressure.  More on that in a moment.

Nature will continue pushing toward equilibrium until it is reached or effectively thwarted, and that is where a vapor barrier comes into play.

What is a Vapor Barrier?

Also from our glossary,

Vapor Barrier - (n) A moisture-proof membrane used in walls and ceilings to prevent the transfer of moisture. Most buildings use an exterior vapor barrier to prevent moisture from coming into the building. Natatoriums, however, need an interior vapor barrier to prevent moisture from pressing out of the building, which causes issues like efflorescence. Also referred to as "vapor paper". See Vapor Pressure.

For most buildings, a vapor barrier is the waterproof paper installed on the outside of a wall before the finished of the wall is completed. It looks like Tyvek or a similar brand, which is then covered with brick or siding. This barrier prevents moisture from traveling through it, because moisture has no problem penetrating brick, stone, wood, or just about any other type of building material. "Vapor paper" is impervious to it, and is therefore an essential part of the construction process.

Indoor swimming pools, however, have the vapor pushing outward from the building, rather than inward. So the vapor barrier belongs on the inside of the wall to prevent moisture from penetrating to the outside. The consequences of having no vapor barrier are problems like efflorescence (pictured below) or other moisture damage in or around the walls.

Efflorescence on the outside of a natatorium wall is a common consequence of not having a vapor barrier on the inside of the wall to prevent vapor pressure from pushing moisture through the wall to the outside. 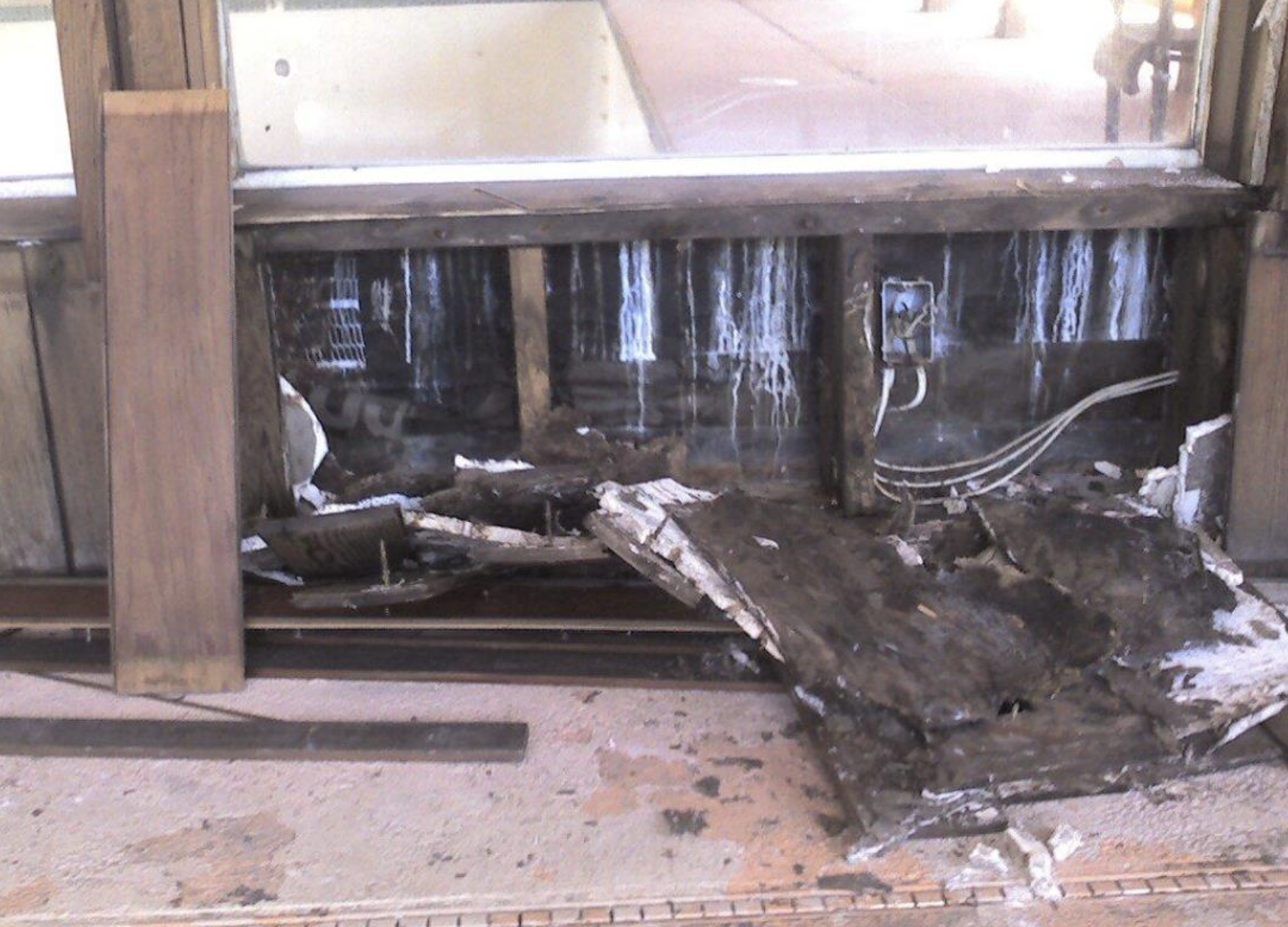 Without an interior vapor barrier, moisture can destroy many types of building materials and lead to rust, mold, and other problems. Photo Credit: Desert Aire

Vapor paper may be the most common, and most affordable type of vapor barrier, but it is certainly not the only type. There are paint-on vapor barriers, as well as various types of sealants the seal up lights, roof lines, door frames and other fixtures. Moisture will find the path of least resistance when trying to escape into other parts of the building, or to the outside. Doors need seals, and every opening needs to be accounted for.

We have seen vapor barriers fail before, and usually it is a consequence of 'missing a spot', or forgetting to seal behind fixtures. It needs to be a thorough process, because you're trying to hold back an ever-expanding force of physics. Any weakness will be found and exploited. Vapor pressure pushes moisture in every direction, so be thorough.

Vapor pressure is the force of expanding moisture (humidity, or water vapor) in the air. It is under pressure because there is a differential between where the moisture is and outside of that contained area.  Outdoor pools do not have vapor pressure concerns because the open air is too vast for a pool to make a difference. But indoor pools do matter, because they have much greater vapor pressure than rooms around them and the outside itself. To hold back the moisture, we must use a vapor barrier to prevent the migration of moisture through the walls. Without a vapor barrier, moisture will penetrate through brick, stone, wood, and just about any other type of building material until it reaches the outside. Costly consequences result.